We started on our final day out at 9:30 and luckily met up with another boat to share the three Calcutt Locks.  Then turned left at Napton Junction towards Braunston.  The weather was sunny but there was a dtrong cold wind.  Too strong for us to moor easily in our marina without banging into a pontoon or another boat.  So we have decided to spend the night in Braunston and go into the marina tomorrow when the weather is forecast to be much less windy.

In the afternoon walked to a local pub to book a meal for this evening and then to the chandlers and Braunston Boatyard where we may have some work done later in the year. 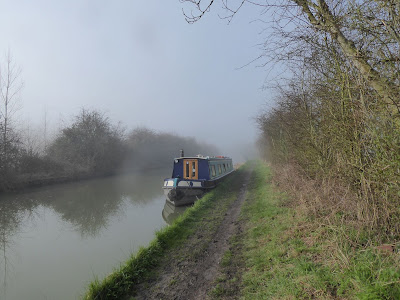 A misty morning on the Grand Union

A misty morning first thing but by the time we set off it had cleared and the rest of the day was sunny. 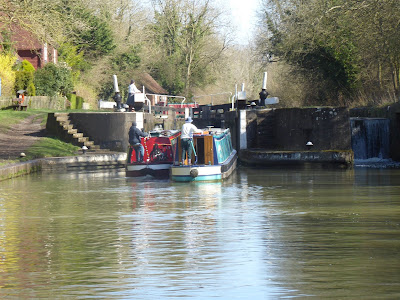 We went through the first lock on our own but we saw a boat behind us and waited for them at the next. It was narrowboat Swan with two people on board.   Having twice the number of people working the locks with one person going ahead to set up the next one made for a very fast passage.  We were also able to cruise out of one lock and into the next side by side so avoiding any need to secure the boats with ropes whilst in the locks.

We reached our planned mooringnear the village of Stockton just before lunch time much earlier than expected and so had time to clean Densie and touch up some paintwork during the afternoon.  Another good day's boating. 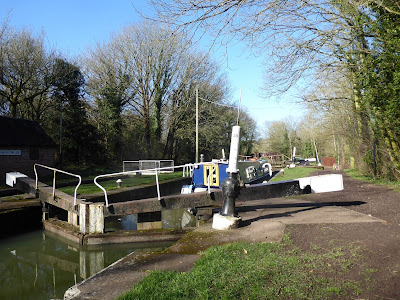 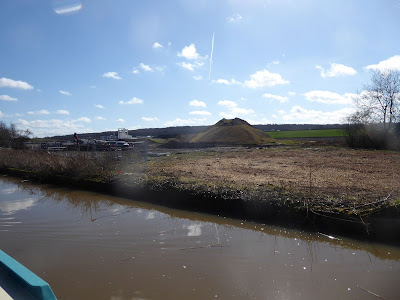 HS2  will cross the canal
Much better weather today, dry and sunny though a little chilly at first.  We set off at 9:25 and stopped for lunch at 12:05 after ascending 6 locks.
We were ready to set off in the afternoon but we saw a moored boat (A) ahead of us had come adrift and was blocking the canal.  Another boat (B) coming down the canal was waiting to get past.  As there was no-one aboard we climbed onto boat A and returned it to the bank with the help of a passing walker.  However by this time boat B had become stuck aground on the far side of the canal.  So we took Densie alongside and were able to tie a rope and pull him back into deeper water. 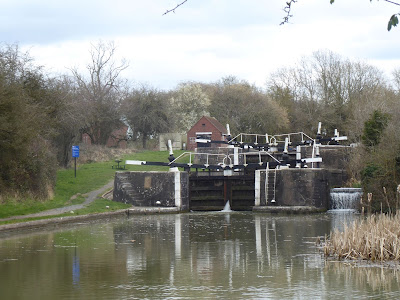 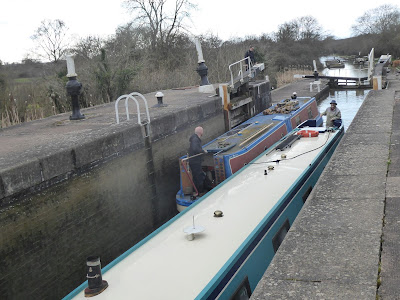 Passing in the m iddle of thr staircase

And then onto Bascote locks, first the two separate ones and then the 2-lock staircase.  As there was also a boat wanting to come down the staircase after a bit of discussion we agreed to pass each other in the middle.  It seemed the sensible thing to do and worked fine.  This was the first time we had done this, mainly because double width staircases are rare, I think the Bascote example is the only one south of Yorkshire.

The next job was to fill up with water just beyond Bascote and shortly after moored for the night.  A good days cruising!

The good weather could not last, and it didn't.  The weather forecast showed heavy rain all day.  However it looked a pleasant day when we moved the boat the 100 yards to Kate Boat's Warwick facilities to empty the waste tank.

The necessaries bing completed and the boat turned around we set off towards Morrisons on the outskirts of Leamington Spa as we have used most of the food we brought with us from home.  AFter shopping it was another short distance to the nearest point to the centre of Leamington.

The rain had started gently by the time we moored up in central Leamington. Denise needed to visit an optician as she had bent her best specs.  So we walked to the shops taking umbrellas but they were not really needed.  Specsavers fixed Denise's glasses for free and we returned to the boat for lunch. 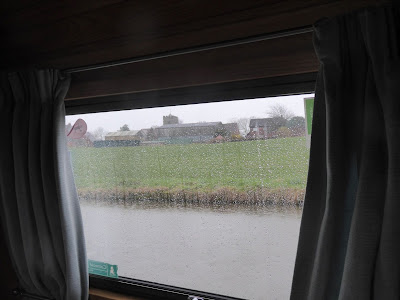 Radford Semele church in the rain
After lunch the promised arrived.  Hiwever we dd not want to stay in the town so we put on all our wet weather gear and set off again to moor for the night back at Radford Semele at 13:30. 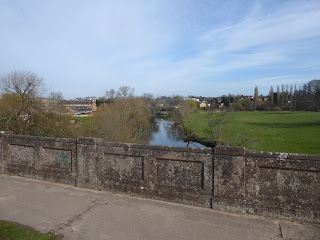 View of the Leam from Leamington Spa Aqueduct 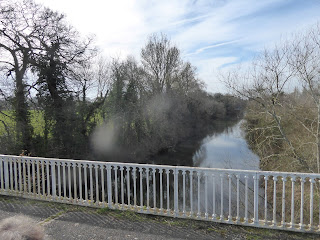 The same, looking the other way 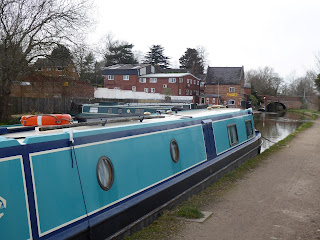 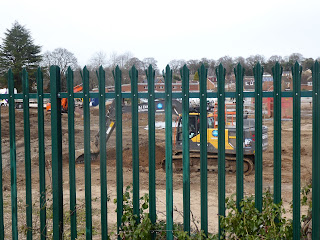 It was a late start at 10am as we some small jobs to do first.  The weather has continued its day be day improvement, no wind, sunny skies, and only cold enough for two layers of clothing.  We were soon into Royal Leamington Spa.  In Georgian times it was an elegant inland resort but became industriallised  later in the 19th century. The canal side is unexceptional except for two large aqueducts, one over a railway and the other over the River Leam, a tributary of the Avon.

The route continues almost entirely through built-up areas all the way into Warwick with only a  minimal gap between the two towns. We have moored in Warwick, about as close as the canal gets to the town but it's still a hilly 20 minute walk. I am not sure that it was worth the effort.  There are many restaurants, cafes and bars, a surprising number of estate agents (several in our area have closed), and a large number of independent small shops selling "arty"ephemera.  Plus of course the usual charity shops etc. 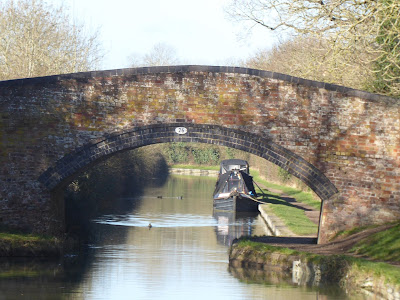 View from our mooring this morning 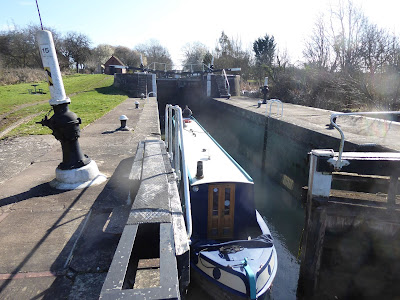 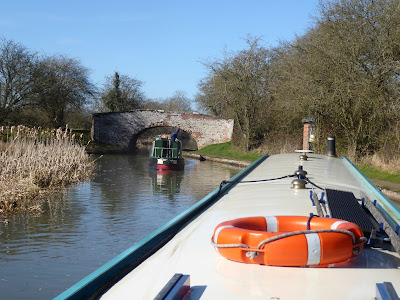 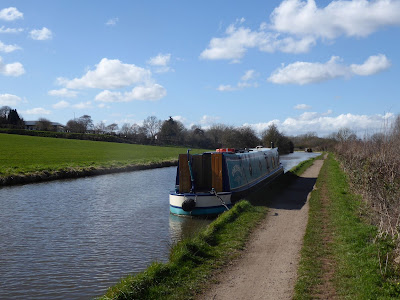 We started off at 9:15 to our first locks of the day,  Bascote Staircase consisting of 2 linked locks.  Here we met Aurora again who waited for us at the following lock.  We stayed together through the next 8 locks which were spread sporadically along the canal.

Our plan was to go into Leamington Spa but a mile before the town we found an attractive mooring spot near the oddly named village of Rdford Semele where we stopped for the day at 12:45. 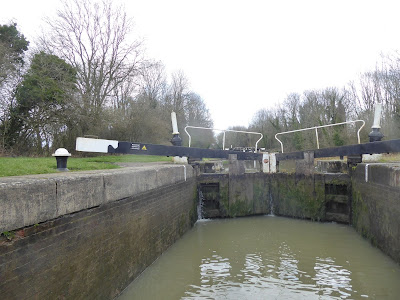 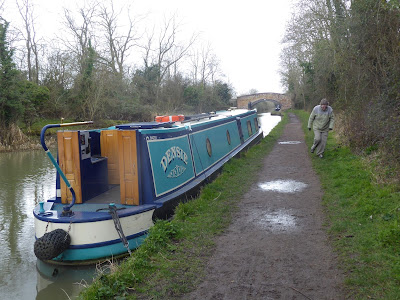 We lset off at 9:45 in beer weather than yesterday. with some sun and less wind.  After a mile we started the descent of 8 locks of the Stockton fligh..  For the first 4 locks we were on our own which was hard work.  Luckily we saw another boat, Aurora, a couple of locks behind us so we helped them catch upand went down the remaining 4 locks together.

Aurora then moored up but we continued through a couple of isoated locks and stopped  for the day near the main road to Long Itchington.  It was only 12:45 but we were tired.